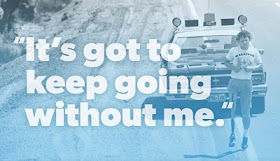 On Sunday September 15, Terry Fox Runs will take place in more than 35 locations in Newfoundland & Labrador.

Terry began his Marathon of Hope right here in 1980 and inspired Canada by running a marathon a day to raise money for cancer research. During a span of 143 days and 5373kilometers, Terry had run through six provinces but on September 1 1980 had to stop running as the cancer returned to his lungs. He died June 28 1981.

Now more than one million people take part in over 9000 Terry Fox Runs in 32 countries around the world, and more than seven-hundred and fifty million dollars has been raised for cancer research.

CLICK HERE to find a run near you and register today.
‹
›
Home
View web version